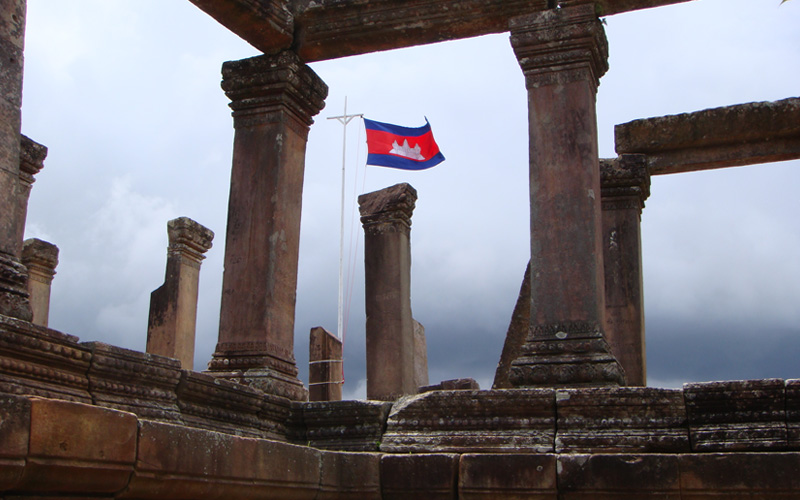 “There is a saying here,” a Phnom Penh journalist told me jovially as we drove past the Tonle Sap river at sunset: “the Chinese chase Cambodians… the Cambodians chase ghosts.”

It was meant lightheartedly, but there was a dense sadness behind his words.  In that one phrase is a condensed sense of what Cambodia is like: a complex, bittersweet, fruit.  Tantalisingly enticing with its many layers.  Seemingly simple, but ultimately a mouthful.

There’s a new generation on the rise that didn’t grow up with knowledge of the Khmer Rouge – four years of brutal communist reign in the 1970s that scarred the generations before them.

It is estimated that more than two million people were killed under the regime — but many young Cambodians feel such genocide was an illusion, or an exaggerated tale.  Besides — what does it have to do with them now anyway?  It doesn’t affect them, surely.

But it does — because it is the underlying carpet on which their national identity rests.  Whether they’re aware of it, or not.

For starters, their Prime Minister is a former Khmer Rouge commander who has managed to ‘re-invent’ himself and remain in power for some 30 years.

Filmmaker Rithy Panh says “if we do not understand our past, how can we create our future?”

He’s celebrated as the first Cambodian nominated for an Oscar award.  His film, called “The Missing Picture”, is about national memory and the Khmer Rouge.

Panh says his goal is to educate the young – to open their souls.

There were already recording devices during the Khmer Rouge, and yet, there is barely any “evidence” left of that regime.  So determined were its leaders to protect their legacy that they destroyed any proof of their brutality.  But Pahn offers himself as such, and made it his mission to gather what little other ‘evidence’ there is.

To him, it is personal.  He’s the only member of his family to survive the regime.

“Not because I was brave,” he admits with a trace of guilt, “but on the deaths of those who were with me.  I owe it to them to speak — and give them back their dignity.”

So, how does their tale begin?  Once upon a time, we were a great kingdom…

“We built Angkor Wat, and yet, have inferiority complex,” Panh says.  The Khmer Rouge beat them down, and left them with nothing.  Fearful.  Faceless.  Devastated.

And to this day, Panh explains, Cambodia is a traumatised nation.

The ‘traumatised nation’ now calls itself a “democracy” – of sorts.  A clumsy one.  One political analyst likened it to children playing in a boardroom without knowing the rules.  The country ‘functioned’, he added, under an authoritarian government that could tell people what to think.

But in a new century dominated by social media, things can no longer work that way.

“We can now see the truth for ourselves,” a young Cambodian pointed out.  “Phone video clips are available on social media sharing sites.  We can communicate directly with people who were there… so we all become witnesses.  It’s not as easy to be lied to anymore.”

People are also more educated.  It would be too late for the government to try and regulate the media now.  It’s been among the most vibrant in Asia, and has gone ‘uncensored’ for years.  A local journalist said that’s likely because officials never gave citizens enough credit to think they would ‘consume’ what was being reported.

Like any developing society, Cambodia is defined by its economics.  Everything comes down to money, which means one of the country’s biggest problems is corruption.  Salaries are so low that people have to find ways to supplement their income.  Hospital workers, for example, ask for a fee to treat you – even if health services are meant to be free for the poor.  Then, of course, there is the procedure of needing to prove you are actually poor, which in and of itself is problematic.  People end up drowning in red tape, and the only wat to cut through it is by bribing someone.  That is, if you have the funds… which, of course, many don’t.

“It makes me so angry,” says Swiss doctor Beat Richner who has worked in Cambodia for over two decades.  He’s set up the only 4 hospitals known to be corruption-free, and has been credited with saving more lives in the country than the government’s ailing health care system.  Millions of dollars in aid go unaccounted for every year, and yet, the government seems to look away.

But many Cambodians will no longer sit idly by and watch it happen.  There is a growing unease about the direction the government is leading the country.  There have been demonstrations, and worker walk-outs.  For many, the only way to earn is by moving to the capital.  But the capital is also the most expensive place to live.  So after they send money to families and pay their own bills, they have nothing left.  Or worse, they find themselves in debt.  It’s a vicious cycle.

Some Cambodians say their problems are aggravated by the presence of Vietnamese migrants.  The two countries share a rather porous border, and a long, complex, relationship.

It is a nation at a crossroads, and Cambodians have to decide who they want to be moving forward.

For many here, the only way to do that is indeed by confronting – and healing – their past.

“Our wounds are self-inflicted,” offers one social analyst, “we are defeating ourselves.”

Cambodia is on the brink of change — once they stop chasing ghosts long enough to see there is no more reason to fear them.

About the Author:
Marga Ortigas is a communications coach who has travelled the globe for 25 years as a broadcast journalist.