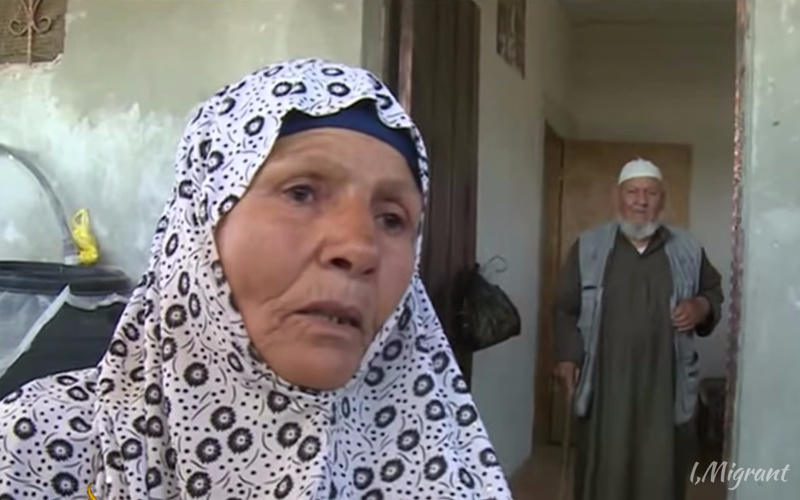 Seventy-three-year-old Mansura Abu Sha’ar was more than happy to talk to strangers.

People rarely came this far, she told us, and it seemed to her that very few of those that did, cared enough to ask how they were doing.

Mansura was clearly exhausted from having stayed up the night before. Mansura Abu Sha’ar in front of her home.

Fearful for her family, she sat outside her makeshift house just a few hundred metres from the border between Gaza and Egypt, on guard until dawn.

“We’re used to the guns and the rockets and the explosions,” she said.  “But now – water?”

Her voice trembled, and tears began to pool in her eyes.

“This is our life,” she said hopelessly. Along the border in Rafah between the Gaza Strip and Egypt.   The line between the two runs nearly 15 kilometres.

Mansura lives in Rafah, the town divided between Gaza and Egypt by international political agreements in the 1980s.

With Israel the only other way in or out, Gazans saw the border with fellow-Arab Egypt as the “friendly” alternative.

It was a pressure valve when all else around them seemed to be closing in.

But the “friendly border” closed when Hamas took control of the government in Gaza in 2007.

At least in theory.

Underground, an entire network of smuggling tunnels was fully operational.

As it had been for years, allegedly with Egyptian border guards looking the other way. One of over 200 smuggling tunnels that go from Rafah in Palestinian territory, to Egypt.  Local officials said a number of Palestinians have been killed in them by water pumped in by Egypt.   Less than 20 tunnels are believed to still be operational.

Hamas, the group which administered Gaza’s government from 2007, earned millions of dollars in tax revenues from these smuggling operations.

But aside from seemingly harmless goods, the tunnels were also used as passages for weapons and fighters.

Hamas denied such “transits”, but with the changing political tides in Egypt, the denials meant nothing.

And such passages became an even bigger concern than they might have previously been.

So the Egyptians tried to build a wall, and destroyed built-up areas to create a buffer zone.

The Gazans only dug deeper, and farther. Looking into Egypt from Gaza.  Over the years, security concerns prompted both Egypt and Israel to demolish thousands of homes here and create a buffer zone to help them monitor cross-border illiegal activities.

People here say there are so many tunnels – some going as deep as 30 metres – that these have likely already destabilised the ground.

But many residents feel they were left little other choice than to dig a way out.

“These tunnels were harmful for both us and the Egyptians,” Subhi Radwan, Rafah’s mayor, said.

“We wanted the relationship between us to be normal, above-ground exchanges.” Sea water on the Rafah side of Gaza’s border with Egypt.  Residents say it was pumped across from Egypt.

The Egyptians say they are building fish farms along the border, and sea water is flooding the tunnels.

“This will damage the aquifer,” Radwan explained.

“Rafah’s underground water.  Which means no potable water.  It will also deprive the farmers from using the water for irrigation and growing their plants.

“It will cause landslides, and could lead to the collapse of houses along the borders. Foundations here are already weak from all the shelling…”

There are those that say these scenarios are exaggerated.

But not much can pacify Mansura Abu Sha’ar. An anxious Mansura Abu Sha’ar keeps watch over what’s left of her home.

“There is nothing stable about our lives,” she said.

“Our days are full of horror and fear.”

Her face crumpled in pain, making tangible her deepening sense of isolation and abandonment.

Mansura looked around her warily, her frightened, weary, eyes expecting only the worst.

“We are surrounded by people,” she said passionately, “all looking in, but none of them will help. It is like we are in a desert, forgotten and alone, surrounded, but ignored.”

She clasped her hands to her chest as if struggling to breathe.

*An earlier version was first published by Al Jazeera English.

Marga Ortigas is a journalist and communications coach who has worked for CNN International and Al Jazeera News.