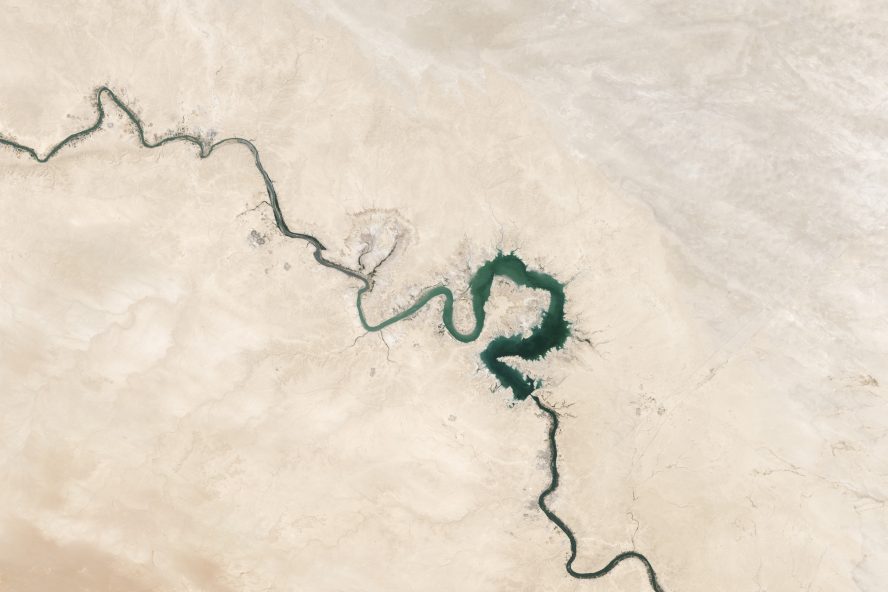 The afternoon was overcast. The way most December afternoons are in Baghdad.

A soft mud-yellow breeze blowing against a beige sky.

The brown date palms were dressing down for the coming chilly winter evening.

So, this was winter in the desert.

No clouds. But no sun. Just endless… dirty yellow.

The colour of winter in Baghdad.

I was allowed out of the office with Samir*, a local producer, and Emad*, a young journalist from the U.S.

An “under-the-radar” mission with native Arabic speakers so I might perchance take in a bit of the “local colour” before the end of my last tour-of-duty for the year.

Without our usual security escort in tow, we planned to blend in with the rest of the city to keep from attracting unwanted attention. I was told I could “pass” as “native” anyway — so long as I didn’t speak.

Within minutes from the office, we were in Karrada.

At its centre, it looked like a colonial throwback to a simpler time. Before things were overly-commercialised or “re-vamped” by war.

Its high street was lined with one-storey shops and littered with sidewalk vendors.

You could find anything in Karrada. From the latest in TVs and satellite dishes to traditional scarves and dish-dash. From shishas that you could pack in little briefcases to army medals presented by Saddam himself.

Or so they were touted.

Who knew if it was true? Did it even matter? Everything was about the simulacra now anyway, right?

The image. The appearance. The reward or the trophy you got to bring home as a proud souvenir of an historic time.

Truth? Where was truth in that?

To many people, it didn’t really matter anymore.

Home of “Wike — just do it!”; “Pama — the sports leader”; Class A imitation — “not fake” — Rolex, and ancient Mesopotamian knives and blades. All glowingly made in China.

We parked the car we’d borrowed by some rubble on the street and got out in front of Majeed’s. A relatively dark art gallery framed by the flashy yellow gold of the many jewellers on either side of it.

“A good friend of mine,” Samir told us. “Great paintings — just you wait.”

Why we decided to buy art as our tokens and mementoes of wartime Baghdad I really can’t begin to explain. It just seemed — to make sense. This was after all the “cradle of civilisation”; the land of the most “ancient” of “ancient peoples”. Their art should be — interesting. To say the least.

It would be like peeking into their timeless soul — a glimpse at forever.

Like staring into the eyes of eternal truths that survive the changing sands. How does one survive the shifting sands?

And so, we walked into Majeed’s.

A short, balding, jovial man greeted us with a sweaty handshake.

“A friend of Samir’s is a friend of mine! Come see my treasures!”

The small room was filled wall to wall, from floor to ceiling, with what could be called “traditional art”.

Desert scenes in oil and pastel. Palm trees in orange and brown. Oases drawn against an autumn moon. Harems and palaces. Sheikhs and harlots. Horses. Sands. Oil lamps and flowing robes. The grandeur and mystery of the Arabian past.

There was none of the art that I was expecting would be created in the ‘modern’ age. No pieces reflecting the horrors of living under a cruel, dictatorial regime. No death, no war, nor conflict.

Instead, I was surrounded by billowing sands, magical trees, and the glory of their ancient race. Beauty and elegance. A mirror back to more triumphant days.

There it all was — in every frame. The wildness of Arabian history reflected in this region’s landscape, and its people’s faces.

Lots and lots of faces.

We were overwhelmed by portraits.

Four-foot high paintings of princesses and sultans in their finery. Gold headdresses and silk turbans. Faces outlined in black ink and translucent in moonlight. Bewitching black or green eyes staring right through you past fine, long lashes.

“This is nothing,” said Majeed. “Come to my backroom, for special friends.”

We were led down a dark corridor, lights slowly coming on as we walked by. The effect of saving energy, and the generator only being able to light one part of the gallery at a time.

At the end of the hall, another small room. Pitch black.

I could feel Majeed moving around behind us and heard the slight ping of a button being pressed.

An old French classic suddenly came through hidden speakers, and a dim orange light flickered on.

“Look!” Majeed exclaimed. “Look before you.”

And there — before us — from floor to ceiling, and wall to wall — were some of the most breathtaking desert scenes painted in fluorescent oil on black velvet canvasses. They were jumping out at us in blacklight — like mirages in an evening sandstorm.

No one spoke for a few eternal seconds.

Apparently, the music always helped him make a sale.

“A proper gallery owner must always set the mood,” Majeed insisted. “You must set the mood.”

The romance of the Arabian soul. I bought quite a few ancient Baghdad street scenes painted in oil. And Emad spent a fortune on one grand picture after another.

“There’s more,” said Samir. “We have yet to go across the street.”

… to another dark gallery with the sound of a generator starting up as we knocked on the door.

Amidst the usual collection of date palms, camels and regal horses — there indeed was abstract art Arabian style.

Nothing spectacular. A trifle trite. I was disappointed.

What happened to the ghosts of Saddam Hussein? Where was the powerfully painful art created by tortured souls?

Was I living in a shallow dream world of two-dimensional expectations?

“Come check these out!” called Samir.

In a back room, three works by “one of the most famous modern Iraqi painters.”

With the generator humming in the background, and a spider busily spinning its web in a dark corner, we saw it.

It was on the far right. Unmissable. An inspired piece.

Dark blue from the bottom till halfway to the top.

A heavy white from the top till halfway to the bottom.

The two colours met in the middle.

The ocean? The sky? Eternity. Who knew?

There were also a few splotches on it that could have been waves… or maybe clouds?

And in the middle of all that white on the top half — a smudge. A hole. Almost like a rent in the fabric of time.

I saw it as a tear in weighty reality from which one could escape.

Samir told me he saw it as hope. A doorway past all that blue into heaven.

We sighed as Emad stood perplexed.

Emad wanted to be told what he was looking at instead of finding it for himself.

He preferred the painting on the left. Black with red and green lashes.

It looked like it had been beaten instead of tenderly created by a masterful hand.

Samir and I walked away.

We left Emad alone to commune with the canvasses so that he might perchance hear them speak to his soul.

We were sure he’d buy the black one. It was him. It was what he understood.

Nearly an hour later, he came back to us:

“I’m taking the one with the hole,” Emad said with finality.

“Because it frustrates me.”

“The one with the lashes was too easy — you know what it’s saying. And to me, it says only one thing. But this one…,” he said, looking at the painting with ‘the hole’, “this one — is like Iraq. You can’t quite understand what’s going on, and it challenges you. Things are not what they seem, and there is not one version of the truth. There isn’t just one meaning to the landscape. We know the artist has her own view and a point she is trying to make — and I just can’t figure it out yet.”

At that point, the gallery owner seemed to realise that we were in search of modern art. So, feeling a little bolder, he asked us to wait as he went to a back room to bring us “something special”.

As we waited, the beginnings of the call to evening prayer stealthily made their way into the gallery. The sounds of the Middle East wrapping us in its hypnotic embrace.

Nearly half an hour later, the gallery owner returned, struggling with two huge canvasses that he hurriedly leaned against one dirty wall.

Then, he left again to come back with two more canvasses.

“Look,” he said as he turned each one over carefully. “These will be put on display next week at a special show. Reflections of Saddam’s time.”

And right next to walls showcasing large oils of desert warriors on their steeds killing colonial soldiers, the gallery owner revealed the most hair-raising portrayals of mass graves and torture victims any of us had seen.

The works were all crafted in the colours of bone and earth. So real you could almost touch them. Broken bodies stripped to their bare bones in twisted positions crying out in pain.

We fell silent. It seemed disrespectful to even gasp.

The call to prayer ended.

Through time, not much has changed.

Men and their hunger for battle.

The gallery owner — whom we hadn’t even noticed slip away — returned with a silver tray carrying fine, thin glasses filled with tender Arabic chai.

“Please,” he said, in offering.

I was struck by the irony as we looked at the simulacra of mass pain on a few cheap canvasses.

There is such a gentility and civility to man — why is it much, much easier to accept brutality as a fact of life?

A simulacra of existence.

I will take this one… because it challenges me.

Where’s the rent in the fabric of reality from which we can all escape?

Samir sipped his tea, then gently put his empty cup down as he smiled at me.

There it was. In his eyes.