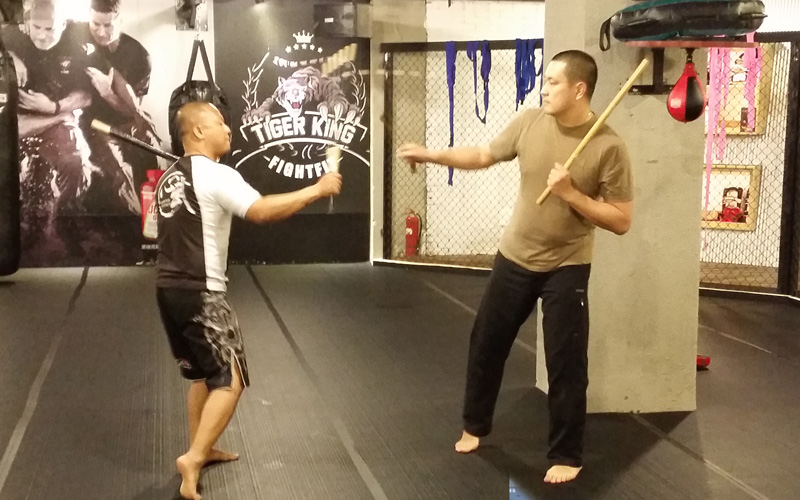 It was a rather unusual trajectory.  Rhio Zablan went from working in the Philippine President’s press office to — “the other side”.  At least that’s how many Filipinos would see it in these times of frayed relations between the Philippines and China.

Zablan now works for the Chinese government.  Propagating Chinese views and culture, in Filipino, for the state-run China Radio International.

We meet him at a gym in Beijing on his day off from work.  He is jovial, and relaxed.

“There are misconceptions about Chinese media,” he says casually.  “We want to disprove that people think Chinese media is just a propaganda machine – no, it’s not.”

Zablan is aware that he runs the risk of sounding exactly like the “propaganda machine” he is meant to be disproving –but it is easy to sense that he believes what he says.  He’s a positive person who wants to see the best in things.

And China has been good to him.

Zablan first came to Beijing to attend a conference.  On that brief trip, he met the woman who would become his wife.

He returned to Manila knowing he had to find a way to be with her.  Since she could barely speak English, Zablan explains that he believed there would be little opportunity for her in the Philippines.

So he gave up his job, and moved to Beijing.

She worked at CRI – and her colleagues eventually invited him to work in their Filipino service.  That service was nearly half a century old, and run by Chinese nationals who had studied the Philippines in a Chinese university and spoke more formal Tagalog than anything heard on the streets of Manila today.  (Or even in the halls of Philippine congress.)

“I love it,” Zablan says.  “In the Philippine media, I was primarily doing more political things.  Now I’m happier because I’m doing the cultural things, the things that I love… that I want to do in my life.”

According to Zablan, politics makes things difficult.  It can blind people from seeing the humanity in each other.  Which is why — he says — at CRI they focus more on the “things that unite.”  Like culture, he reiterates, and things of “beauty.”

Zablan says this is also why he now teaches Filipino martial arts in Beijing during his spare time.

The Beauty of Martial Arts

“Everything that we do in the Philippines is embedded in ‘arnis’.  For example, when I move this way and I move that way,” he demonstrates parrying movements – “my partner also moves that way and this way.  What is that in Filipino culture?  That is ‘pakikipamuhayan’ – what we call: peaceful living with each other.”

It is not about attacking, or fighting – Zablan stresses — it’s about learning how to move with someone else.  Coexisting.

Some people in Zablan’s home country might feel he is helping “the enemy”: the anger at China over what is seen as its aggressive stance in the South China sea dispute is quite tangible in the Philippines where there has been a public campaign to boycott Chinese products.

“It’s not easy of course with what’s going on right now,” Zablan says, acknowledging the tension.

Again, it may sound overly simplistic to some.  But as far as Zablan is concerned, life is simple.  Or at least, it should be.  People complicate it too much with their politics and their bias, but what matters in life, Zablan stresses, is simple.

“Are you – happy?” he begins to enumerate.  Family.  Love.  Friendship.  People.

Wouldn’t the world be a better place, Zablan says, simplified?

About the Author:
Marga Ortigas is a communications coach who has travelled the globe for 25 years as a broadcast journalist.