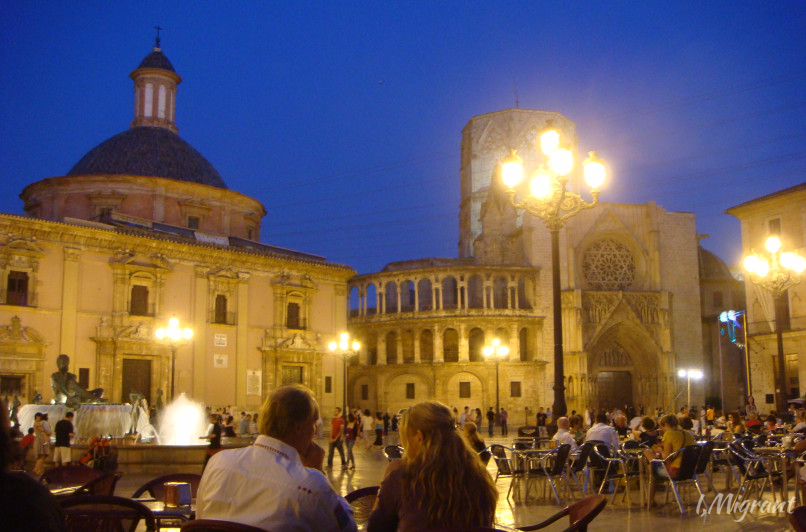 It often begins with getting lost, doesn’t it?  And Barrio Carmen, in Valencia’s Old Town, was a very pretty place to do just that.  Its winding cobblestone streets were like the luminous, narrow canals of a seashell.  A maze of seemingly interminable spirals that opened unexpectedly into bright, loud, plazas exploding with the sounds of life.  All colours and sunshine.  A conch of a city.

It was my first visit, and I had made it a point to not find out too much about Valencia beforehand.

I was staying above a bar called La Carcola, The Shell.  No joke.  I couldn’t have planned it better if I tried.

It was the beginning of summer, in Spain.  Which meant every morning, a parade of joyful noise flooded Barrio Carmen, waking everyone up with a jolt.  Brass bands, religious regalia, and children dressed in bright floral costumes banging on tambourines and drums.  There were also guitars and Elvis impersonators, and all other manner of revelry.  Including fireworks.  This was a city so visibly ecstatic at being alive.  It was contagious.

The market across the Caracola buzzed with the flurry of butchers and bakers and cheese-makers haggling with housewives and students and chefs.  Tales of the night before were exchanged with exuberance, like torrents of confetti bursting forth from cornucopia.

Every morning, I rushed to get dressed to joyously disappear into the jamboree outside. There’s a certain magic in folding yourself into places you’ve never been to before.  To get lost in its corners and crevices, and perhaps discover your own.

Travelling, I have found, is Pilates for the soul.  Going somewhere “strange,” that is – new and unfamiliar, can be unsteadying, which offers an opportunity to exercise being centred in yourself.  To find your bearings from within.  Balance.

In that sense, travel can provide a certain kind of peace.  It’s how I learned to be still, so when the world around me goes mad, I am able to remain upright.  A useful trait to have when working as a journalist and needing to find the silence in the chaos of tragedy.

So, every morning, in this conch of a city, I did Pilates by heading out without a map, or a plan.

I don’t know what I intended to find – not that I hoped to find anything at all – but the space for discovery that it gave was immeasurable.

But one day, I set out from the flat on a mission.  In a conversation with strangers at the Caracola the night before, I found out that the Holy Grail was just a few blocks away.  Literally.  The Holy Grail!

Also known as the Holy Chalice, the most sacred (and sought after) of Christian relics seemed to be inconspicuously housed in Valencia’s Cathedral.  Brought to Spain in the 3rd century by a pope fleeing persecution in Rome.

Legend has it, the chalice was used by Jesus Christ and his apostles during the Last Supper.

After Christ’s crucifixion, St. Peter, the chief apostle, is believed to have brought the chalice to Rome.

Church officials say the Valencia chalice was archaeologically authenticated in 1960.

True or not, this was the stuff of myths – of miracles and magic.  It was meant to contain the elixir of life.

I don’t know what I was expecting to change within me once I saw it, but I really wanted to make sure I found it.  So, I briefly scanned a map before I set out, and marked a route in my head.  All I had to do was walk down Calle Alta until I got to Caballeros, then keep going straight until I hit Plaza de la Virgen.  It seemed simple enough. As I said earlier, it all begins with getting lost.  Which of course I did.

Without the map on me, or a mobile phone, I decided to follow my gut and just keep propelling myself forward.  Surely, I would stumble upon the Cathedral at some point.

But first, there was the charcutería with its limitless bounty of beautifully dried and cured arrays of meat.  Then, the farmacia which reminded me I needed a new bottle of shampoo.  In between, there were numerous tiendecitas selling everything from books to shoes, and cafeterías setting out their special lunch menus.

There were also the beautiful Central Market with its menagerie of edible alchemy; all sorts of plazas that glowed gold in the sun; old homes turned into miniature toy museums; and even a few erroneous churches – but no sign of the Catedral. Slowly, with each misguided step, I found myself falling in love with Valencia.  With its narrow, cobbled streets and tall, slim balconies draped in flowers and laundry.

I walked like I was on a pilgrimage through this medieval city that sloped haphazardly upwards, then back down again.

Its corners were anarchic, and spots of greenery sprouted unexpectedly.

Putting one uncertain foot in front of the other, I explored every angle like one transfixed by the facets of a diamond.  I no longer even cared where I was headed.

It was liberating to keep going without a map, regardless of destination.

To just be present in the moment.

Knowing that I could never truly be ‘lost’, and would always find a way ‘home’, if I needed to.

Where was I going?  Ah yes, the Holy Grail.  Eventually, of course, I got there.  To the Cathedral.  Four euros and I was in.

As I wandered around the site following everything the audio guide told me, I knew I was smiling from the marrow in my bones.  I was here.  Here.  I couldn’t believe it.

Again, I don’t know what I was expecting of the Grail, but suddenly, there it was – behind a glass case.  Yellow, holy light shining on it.  Some construction work was being done in the room and a giant crane sat silently between the visitors and the glass case.  No one could get close.  But being within the walls of this medieval church was close enough. The Holy Chalice. The ancient relic is a finely polished dark brown agate cup that sits atop engraved gold stems which were added later. Its base, believed to have been added in the 10th century, is alabaster with gold details, pearls, and gemstones. There is a faint inscription in Arabic which scholars believe to be a reference to God.

I walked around, and I stared.

I went right.  Then left.  And I stared.

Was I expecting a ray of light to come off the chalice and strike me?  I’m not sure.  But I wandered all sides of it to get a glimpse of its angles and capture the full image in my soul.  The Holy Grail.  Christ’s cup from the Last Supper.  In a cathedral that used to be a mosque, on the site of an ancient Roman temple.  It’s traversed centuries and has inspired countless spiritual quests.  There it sat, and I was in its presence.

When I eventually bid the cup farewell, I felt a bit like I’d won a European football championship.  As if I could do anything I set my heart to.  I don’t have an explanation for it, the feeling was just overwhelming.

By the end of my ‘quest’, I knew that no matter where I found myself next, I just had to keep putting one foot in front of the other, and with expectant eyes, take in the wonder of all that was around me.

To try everything, and learn.  To appreciate and be grateful.  To leave the map behind and get lost.

To trust in the stillness, and the journey.