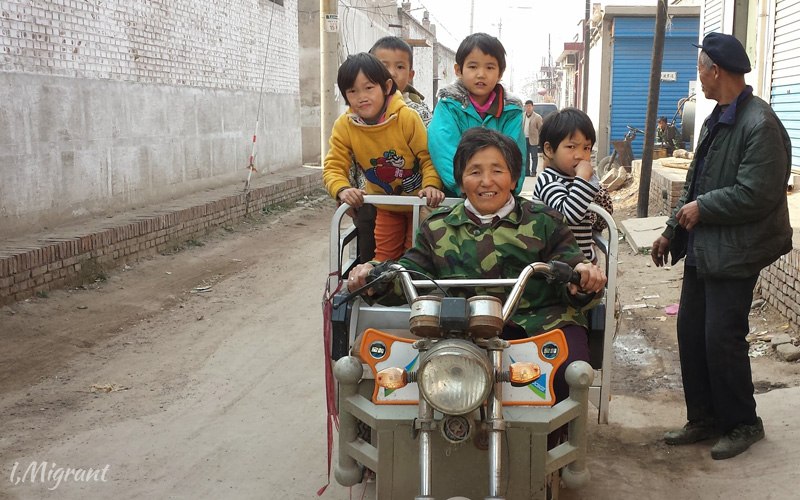 It’s hard to miss her even in a crowd.

At about 4-feet high, 65-year-old Kong Zhenlan was barely taller than the children in her care, but she was quite a presence in her worn-down camouflage jacket and her beaming smile.

She shone brighter than the sun that was barely visible through the heavy pollution in Shanxi province.

“Just call me Mama…everyone does,” she offered in Mandarin, shaking my hand vigorously.

Her energy was infectious as she eagerly told us the story of Happy House, as it is now called.  Her humble home in the rural village of Jiu Ji.  In one of China’s largest coal-producing regions.  Among the most polluted places in the world.

“We have 39 children,” she said.  “Well… 33 now.  Six have died.”  Only four of them biologically her own.  The rest she had taken in as babies when they were abandoned by their birth-parents.

“I found the first one on the side of the road…,” Mama Kong recalled.  “Just … left there.  How could I do nothing?”

Deeply religious, she explained it went against her Catholic faith to walk away.  To not care for  “the smallest of God’s creatures.”  Particularly those in such obvious need.

“All these kids, more or less, have problems…either physically or mentally,” she told us.  Some had visible deformities from birth, others suffered from internal troubles or had developmental issues.

In China, such babies are cause for shame, Mama Kong explained.  So, their parents would rather “do away” with them and pretend they didn’t exist than have to explain to society why their child was “defective.”  That … and the one-child policy, Mama Kong stressed, is why there are so many abandoned children.

Research has shown that in Shanxi, many of those abandoned babies are “defective” because of the acute pollution.  Toxins produced by burning coal and chemicals that have seeped into the soil and water supply have increased the risk of birthing children with special needs by 450%.  Many with cleft palates, neural tube problems, brain issues, or missing – or indeed, extra — appendages.

“It costs a lot of money to care for them,” Mama Kong noted.  “But we have managed,” she beamed.

Her family used to live off the 8,000 square metre land they tended.  “The government confiscated that, though,” she told us.

Her land was taken because by raising more than 30 children, she was found to have violated the birth control law.  But that didn’t faze her.  She took on odd jobs – mending clothes, recycling garbage, anything that could earn extra funds to feed the children.  And when story of what she was doing spread, people gave her what help they could.

“There is still kindness in the world,” she said not the least bit surprised.  “But I worry what will happen to them when I am gone…”

Mama Kong is making sure she is preparing the children for life as best she can, even though sending them to school has been less than easy.

“You need birth records for all that,” she told us.  And of course, none of these abandoned kids came with any.

She begged, she pleaded, she charmed… and through the seeming force of her will – she managed to get the local government to issue papers for at least most of the children just so they could get an education.  One of the children even proudly spoke to us in English to show what he had learned in school.

“They’re all good kids,” Mama Kong confided.  “Easy really… with good temperaments.”
It wasn’t hard to see they were living surrounded by love.  And that seems to have made all the difference.

Happy House is indeed the right name for Mama Kong’s residence.  Her children’s laughter could be heard out in the streets.

Her own biological children seem to have learned a lot from their mother: one is now a Catholic priest, and another is kindergarten teacher.  When asked what it was like to grow up in such a crowded house… without blinking, even with so little, it was clear they felt there was always enough go around.

“It was cosy,” Mama Kong’s daughter told us.  And she smiled just as brightly as her mother.

But Mama Kong can’t help them all.  And though the govt is now making moves to limit the use of coal and fight pollution, there are millions already suffering its effects.

“Who will help them?” Mama Kong asks, concerned.

Who will help them, indeed.